To use the regression equation to predict, you have to calculate the coefficients and

. And there is another problem that affects the accuracy of the prediction. It is that there are usually no all possible values of the variables X and Y, that is, the general set of the joint distribution in the forecasting problems is not known, only the sample from this general population is known. As a result, when forecasting is not a random component, in addition to the random component Another source of errors arises – errors caused by the incomplete correspondence of the sample of the general population and the errors generated by this in determining the coefficients of the regression equation.

In other words, due to the fact that the general population is not known, the exact values of the coefficients and

cannot be determined. Using a sample from this unknown general population, one can only obtain estimates

In order for forecasting errors as a result of such substitution to be minimal, the assessment must be carried out by a method that guarantees the non-bias and effectiveness of the values obtained. The method provides unbiased estimates if, with its repeated repetition with new samples from the same general population, the condition

. The method provides effective estimates if, with its repeated repetition with new samples from the same general population, a minimum variance of coefficients a and b is ensured, i.e. the conditions

In probability theory, the theorem has been proved according to which the efficiency and non-bias of the estimates of the coefficients of the linear regression equation according to the sample data is ensured by applying the method of least squares.

The essence of the method of least squares is as follows. For each of

the sampling points, an equation of the form

is written . Then there is an error

between the calculated and actual values

. Solving the optimization problem of finding such values

which provide a minimum sum of squared errors for all n points, i.e. solving the search

problem , gives unbiased and effective estimates of the coefficients and

. For the case of paired linear regression

, this solution is of the form:

It should be noted that the unbiased and effective estimates of the true values of the regression coefficients for the general population obtained in this way from the sample do not guarantee against error in a single application. The guarantee is that, as a result of repeated repetition of this operation with other samples from the same general population, a smaller amount of errors is guaranteed compared to any other method and the spread of these errors will be minimal.

, but in many cases

does not make sense, and often

also does not make sense, so the above interpretation of the coefficient

should be used carefully. A more universal interpretation of the meaning

is as follows. If

is often called the regression coefficient, emphasizing that it is more important than

. In particular, if you take their deviations from their average values instead of the values of the dependent and independent variables, then the regression equation is transformed to the form

. In other words, in the transformed coordinate system, any regression line passes through the origin (Figure 13) and there is no coefficient 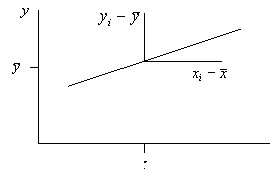 Fig. 13. The position of the regression dependency in the transformed coordinate system.

The correlation coefficient varies from -1 to +1. The closer it is in absolute value to one, the stronger the dependence (the more the data cloud is pressed against its main axis). If

the slope of the regression line is negative, the closer it is to 0, the weaker the bond, with

the relationship of variables is functional. The effect of the correlation coefficient on the shape and position of the data cloud is illustrated in Figure 14.

Fig. 14. The influence of the shape and position of the data cloud on the paired linear correlation coefficient.

it is more difficult to determine. The coefficient of determination shows how many percent of the variance of the dependent variable is explained by the regression equation, and