The industry of the republic has more than 100 branches in its composition. Leading industries: mechanical engineering and metalworking (22% of the total industrial production); fuel industry (17%), food industry (17%), chemical and petrochemical industry (12%), rice. 7.5. 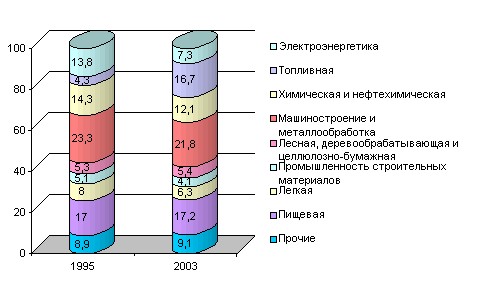 In 2003 relative to 1995, the share of the fuel industry in the total volume of industrial production increased the most (from 4.3 to 16.7%), which is associated with an increase in primary oil refining and an increase in the production of certain types of petroleum products.

At the same time, the share of electricity decreased (due to a decrease in production and the expansion of imports), as well as the building materials industry (due to low production investments in the national economy). 7.5.

In terms of the growth of absolute production volumes in 2003 compared to 1990, such industries as follows are the leaders:

The products of these industries are sold within the republic and are in demand in the foreign market. But there are also industries in which there is a decline in production. These include the fuel industry (53% by 1990), the building materials industry (70%) and the electric power industry (96%). The reasons for the decline in production in these industries are different. Thus, in the fuel industry there is a shortage of imported raw materials. If in
In 1990, 39.4 million tons of oil were processed, then in 2003 – 2 times less.

Indices of total output by industry
industry (in comparable prices, as a percentage of
previous year)

The building materials industry has reduced volumes due to low investment volumes. The electric power industry reduces production, on the one hand, due to the introduction of energy-saving technologies, and, on the other hand, due to competing imports, which in the end is more profitable than its own production.

In 2002, 246 industrial enterprises dominated the market. Of these, by industry:

Annually the volume of production of many of the most important types of industrial products increases in comparison with the crisis of 1995 in 2003, the production of rolled ferrous metals increased by 2.4 times, tires of automobile and for agricultural machines – by 2.1 times, fiberboard – by 2.2 times, paper – by 2.5 times, cement – by 2 times, Table. 7.6.

Production of the most important types of industrial products

The Republic of Belarus exports 90-95% of produced trucks, 80-90% of potash fertilizers and tractors, 80-85% of refrigerators and freezers, 70-80% of chemical fibers and threads, more than half of televisions and tires, almost all manufactured motorcycles and metalworking machines.

In territorial terms, in 2003 compared to 1990 there are the following sectoral shifts:

Among the regions of the republic, the highest growth rates in terms of industrial production in 2003 compared to the previous year were observed at the enterprises of Minsk – 109.9%, Brest – 109% and Minsk region – 108.4%.

The largest share in the republic is occupied by the industry of Minsk, the share of which is 21.3% in the total volume of industrial production. The second place in terms of output belongs to the Gomel region – 20.5%, the third is occupied by the Vitebsk region – 17.2%, rice. 7.6.

Rice. 7.6. Share of regions in the republican production of industrial products (as a percentage of the total)

In general, the specialization of the areas is as follows: