Industry forms the basis of the economy of the republic. In 2003, it accounted for 34% of all fixed assets of the republic, 26% of gross domestic product production, 27% of those employed in the national economy [4, p.118].

In the period from 1991 to 1995, as a result of the crisis, there was a decrease in industrial production in Belarus.

Since 1996, the process of stabilization and growth of production began in the republic, which made it possible in 2000 to reach the level of industrial production in 1990, and in 2003 to exceed this level by 19%.

Key performance indicators of the industry

of the Republic of Belarus

The highest growth rates of output to the level of 1995 were achieved by industrial enterprises of Minsk (2.4 times), Brest region (2.2 times) and Minsk region (2 times). 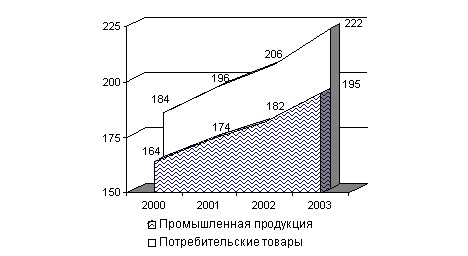 Rice. 7.2. Dynamics of the total volume of production of industrial products and consumer goods (in comparable prices; as a percentage to 1995), [4, p. 121]

In 2003, privately owned enterprises produced 60.5% of the volume of industrial production. 7.3. 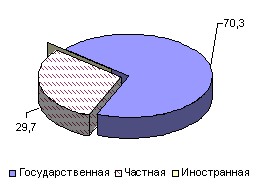 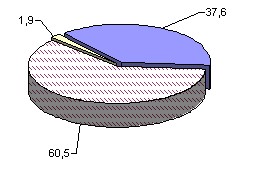 Rice. 7.3. Structure of industrial production by forms of ownership (as a percentage of the total) [4, p.125]

Rice. 7.4. Production of consumer goods (in comparable prices; as a percentage of the previous year) [4, p.132]

Among the CIS countries, the Republic of Belarus retains a leading position in the production of many important types of industrial products.

Production of consumer goods by region (in comparable prices; as a percentage of the previous year)
[4, p.133]

In the total production volume of the CIS countries, the republic produces 67% of tractors, 49% of chemical fibers and threads, 44% of metal-cutting machines, 23% of mineral fertilizers, 64% of motorcycles, 53% of bicycles, part of the total production of televisions, refrigerators and freezers, knitwear and hosiery, Table. 7.3.

The share of Belarus in the total volume of production of the most important types of industrial products of the CIS countries, %,
[4, p.130]

Belarus has one of the highest per capita production rates of certain types of industrial products in the CIS.

Per 1000 population, the following were produced:

However, despite the successes achieved, for some types of traditionally produced products there is a serious decline, Table. 7.4.

Volumes of production by individual types of products in physical terms in 2003 relative to 1990,%

The main reason for the decline is the decline in demand for Belarusian products in the domestic and foreign markets.