Rice. 4.1. Population dynamics in the world, in developed countries and developing countries [3]

The main population growth occurs in developing countries. If before 1950 about half of humanity lived in these countries, now it is 80%, and according to forecasts by 2050 almost 90% are expected. However, by this time many of the developing countries will have moved to the category of developed, but, nevertheless, the ethnic composition of the world’s population will change greatly.

The world’s population is growing, as noted above, at the expense of developing countries. The main reason for this growth is the decline in the mortality rate of the population of countries, especially after the Second World War. As a result, population growth in these countries amounted to about 2% per year in 1925-2001, which is several times higher than in the OECD, CEE and CIS countries, in high-income countries, Table 2. 4.1.

Population dynamics in the world and by main

The demographic situation of Belarus is most similar to the situation in the CEE and CIS countries as a whole. If from 1975 to 2001 they experienced population growth of 0.5% per year on average (this figure is 1.6% worldwide), then according to forecasts until 2015 the population will decline by an average of 0.2% annually. In the Republic of Belarus, the situation is even more complicated, since already at present its population is decreasing by about 40 thousand people a year, and according to the forecast until 2015, the decline in numbers will be 0.4% on average per year. 4.2. 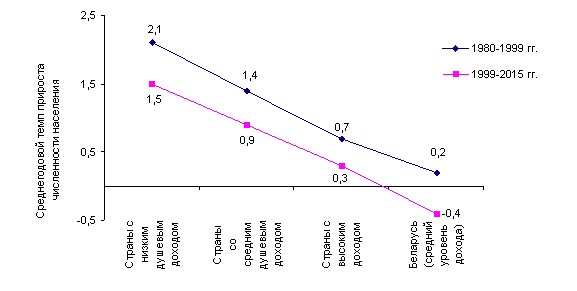 Rice. 4.2. Retrospective and projected average annual population growth rates in countries depending on the level of per capita income, [3, p.20]

It turns out that Belarus, like the entire group of CEE and CIS countries, is out of the general rule (the lower the per capita income, the higher the birth rate): according to the per capita GNI in these countries, there should be a population growth of up to 1% per year; but according to forecasts, as noted above, depopulation is expected, which is not expected even in developed countries.