In the process of exploring an object, it is often impractical or even impossible to deal directly with that object. It is more convenient to replace it with another object similar to this one in those aspects that are important in this study. In general, a model can be defined as a conditional image  (simplified image) of a real object (process), which is created for a deeper study of reality. The method of research based on the development and use of models is called modeling. For example, a model of an airplane is blown in a wind tunnel, instead of testing a real airplane – it is cheaper. In the theoretical study of the atomic nucleus, physicists present it in the form of a liquid drop that has a surface tension, viscosity, etc. The need for modeling is due to the complexity, and sometimes the impossibility of direct study of a real object (process). It is much more accessible to create and study prototypes of real objects (processes), i.e. models. to say that theoretical knowledge of something is usually a collection of different models. These models reflect the essential properties of a real object (process), although in fact reality is much more substantial and richer.

A model is a mentally represented or materially realized system that, by displaying or reproducing an object of study, is able to replace it so that its study gives new information about this object.

Thus, the study of some sides of the simulated object is carried out at the cost of refusing to reflect other parties. Therefore, any model replaces the original only in a strictly limited sense. From this it follows that for one object several “specialized” models can be built, concentrating attention on certain aspects of the object under study or characterizing the object with varying degrees of detail.

To date, there is no universally accepted unified classification of models. However, from the many models, you can distinguish verbal, graphic, physical, economic-mathematical and some other types of models.

A verbal or monographic model is a verbal description of an object, phenomenon, or process. Very often it is expressed in the form of definitions, rules, theorems, laws or their totality.

A graphical model is created as a drawing, a geographic map, or a drawing. For example, the relationship between price and demand can be expressed in the form of  a graph, on the axis of the ordinate, whose demand is deferred (D), and on the abscissa axis , the price (P). The curve clearly illustrates to us that as the price rises, demand falls, and vice versa. Of course, this dependence can be expressed verbally, but graphically it is much clearer (Fig. 1.1). 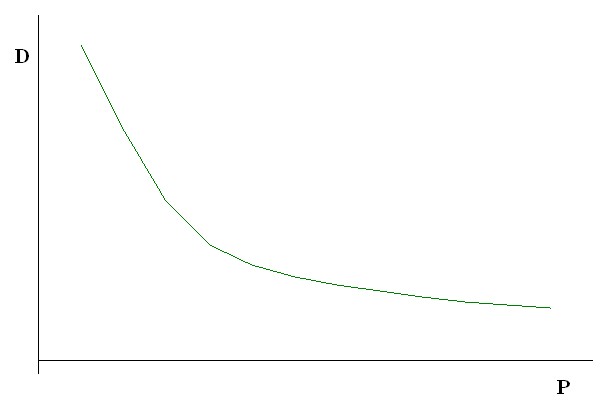 Rice. 1.1. Graphical model showing the dependence between demand and price

Physical or material models are created to construct objects that do not yet exist. Creating a model of an airplane or rocket to test its aerodynamic properties is much easier and more cost-effective than studying these properties on real objects.

When modeling, an analogy is used between the object – the original and its model. Analogies are as follows:

external analogy (model of an airplane, ship, microdistrict, pattern); structural analogy (the water supply network and the power grid are modeled using graphs that reflect all connections and intersections, but not the lengths of individual pipelines); dynamic analogy (in the behavior of the system) – the pendulum simulates an electrical oscillatory circuit.

According to the degree of aggregation of  modeling objects, models are distinguished:

By taking into account the time factor, the models are divided into:

According to the purpose of creation and application,  models are distinguished:

Balance models reflect the requirement that resources be available and used.

Optimization models make it possible to find the best option for production, distribution or consumption from a variety of possible (alternative) options. Limited resources will be used in the best way to achieve this goal.

Network models are most widely used in project management. The network model displays the complex of works (operations) and events and their interrelation in time. Typically, the network model is designed to perform work in such a sequence that the project deadlines are minimal. In this case, the task is to find a critical path. However, there are also such network models that are focused not on the time criterion, but, for example, on minimizing the cost of work.

Queuing models are created to minimize the time it takes to wait in line and the downtime of service channels.

The simulation model, along with machine decisions, contains blocks where decisions are made by a person (expert). Instead of direct human participation in decision-making, the knowledge base can act. In this case, a personal computer, specialized software, a database and a knowledge base form an expert system. The expert system is designed to solve one or a number of problems by imitating the actions of a person, an expert in this field.

According to the uncertainty factor, the models are divided into:

According to the type of mathematical apparatus, models are distinguished: